Does Jesus Coexist? Part I of II 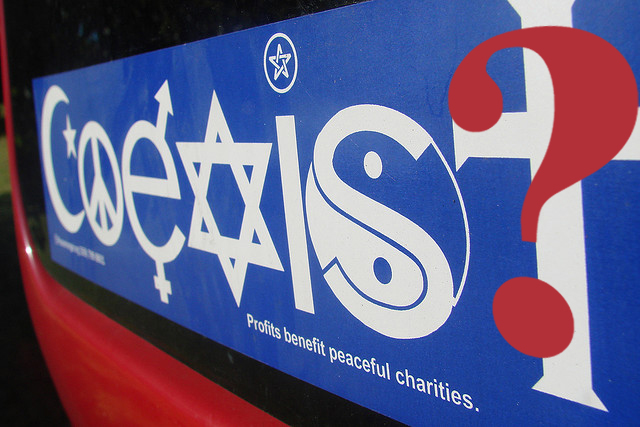 Does Jesus coexist? The word literally means “to exist together at the same time or in the same place,” or “to exist together in peace”. The general cohesion of the design combines with the global peace movement that sways our emotions and something that feels good inside us just seems to click … “yeah.” In case you’re a little confused about the use of the symbols put together in the design, the increasingly popular bumper stickers, as designed by peacemonger.org, show the following:

I like clever things. So I do like the “coexist” symbol in many ways. I also am a fan of peace. Who likes war? Some Christians respond to the message by saying basically: “This is what Jesus taught and did. Like Jesus, we should love others no matter where they’re coming from.” On the other end of the spectrum, some Christians are truly offended by the message, believing that it dishonors Christ by making him equal to false religions and even putting him in partnership with ideas and belief systems that are completely opposed to his teachings. What does the symbol mean to you? If you comment below, I request that you present your thoughts and ideas reasonably and respectfully. It will be clear here that I generally am not a fan of the message. I don’t even think it’s very meaningful. It’s impossible to avoid people, so coexistence should not be commendable, admirable, or something we aim to accomplish. In reading a bit about the background of the sticker, excerpts from an interview with one of its promoters and some interesting quotes from Jesus himself, it’s my hope that you will consider carefully a very important question for anyone reading from a thinking person’s perspective: Does the cross really belong there? Do Jesus’ teachings and life lead us to
assume that this was his ultimate purpose for us? Does Jesus coexist? Thinking people such as yourselves often stumble over His life and teachings, so I warn you to proceed with caution.
The Sticker’s Story

In an age where war, religion and hate make the headlines internationally more than maybe any other topic, the emergence of the “Coexist” message immediately
resonates with the majority of people, especially with anyone who has traveled or has a vision for global peace. Not only that, but it makes sense for followers of Jesus to want to promote this message. After all, we serve the “Prince of Peace” (Isaiah 9:6), who said “peace I leave with you” (Jhn 14:27), and of whom others said peace on earth would come (Lk 2:14). Yet, tracing the story of this message, one easily becomes confused about its origins and may become skeptical of the motives behind its promotion. Assuming the best – that its creators and promoters are really just truth-seeking peace-lovers who want what’s best for the world and hope to make a difference through a simple message, a message brought even by Jesus – is definitely where one should start, but some thoughtful probing questions might reveal important information and answers. Who really made the “Coexist” design? Why are there so many who claim to be its creator? Where did its inspiration come from? Who made it popular? What’s the purpose behind the urgent spread of the message?

The “Coexist” message first gained notoriety when created for a competition and trademarked by the Museum on the Seam for Dialogue, Understanding, and Coexistance. Its creator, Polish graphic designer, Piotr Mlodozeniec combined symbols for the Muslim, Jewish and Christian faiths in the word and intended it to be used to promote religious tolerance – 2001. The symbol was then popularized on the global Vertigo tour of rock icon, U2, in the early part of the past decade. According to a published report, no one from the band had requested permission to use the symbol from its creator. The museum claimed rights. The legality of its use by U2 was in question. Subsequently, a company was quickly formed in Indiana that used the same design with trademark rights requested in 2003 and granted in 2005. Though Coexist LLP profited from the t-shirt sales immediately, it had not been granted permission from the artist who created the design and was actually strongly opposed by Mlodozeniec. Coexist LLP went on to sue numerous other vendors who did not have the rights to the design but were nonetheless selling products with the design.

More recently, numerous versions of the design have also emerged on the market in the form of t-shirts, bumper stickers and more, with some subtle changes added to the design. Symbols for peace (Chinese ying-yang), male/female genders and other belief systems (Wiccan) have been added to the sticker shown here. The intent of newer versions is to promote peace not just between the three major religions but for a diversity of causes. Peacemonger.org promotes and sells some of these designs. Peacemonger.org was created and is owned by Jerry Jaspar, who commented publicly on the previous article published by Enoch Magazine.

Jaspar comments: “This original version of the COEXIST design is a hope. It is an intention, meditation, and a prayer. I had no idea when I designed the above SymbolGlyhic(TM) design it would create such a stir! In my creative mind, it was not ever to have been associated as much with religions, as with humanity as a whole.”

The owner’s comments describing his work seem almost comical in the light of the design’s long story and when we’re reminded of the fact that the original concept was not his but that of Polish graphic designer Piotr Mlodozeniec. Untangling the web of who exactly designed what parts of the design when would require a P.I., and would be sure to uncover ambition, posturing and profit-seeking, but the basic design using the three major symbols has been definitively attributed to Mlodozeniec 2001, making one wonder why so many others (up to 100 according to one source) have appropriated, promoted, profited
or even claimed legal rights to the concept. Strangely, the movement seems divided. The movement’s aspirations for peace between people of different backgrounds are to be applauded and certainly should be sought out by believers and unbelievers alike from all backgrounds, but just how its leaders believe this peace is accomplished is unclear, so I decided to interview him on it to see what kind of a motive might be there from one of the design’s leading supporters. The stickers’ main promoter does not agree with the view that Jesus is in any way divine, or the embodiment of a Supreme being that governs the universe. He believes in Christ simply as a teacher. He follows the teachings of Jesus, in that Jesus said “blessed are the peacemakers, for they will be called sons
of God”, but he views the deification of Christ as a political ploy and an illusion. As for the responses of Christians to his sticker, the peacemonger.org owner says that 85% of responses to the sticker’s message are positive. “The responses of Christians are as varied as there are different types of Christians,” some who support the message and others who take great offense to it. Outside of the Christian response, the sticker has even provoked an attack where the owner was labeled by some a “Jew hater” for being its creator.

It seems that in peacemonger.org’s founder, I’ve found a noble promoter of the “Coexist” label. He claims his organization is a non-profit and he donates proceeds to good causes.* Also, I can’t say I completely disagree with the owner’s thoughts and his reasoning on this image. Jesus does say in Mark 9:40 “whoever is not against us is for us.” Jesus was never out to make enemies. He did not want to drive anyone away, or offend people unnecessarily. He taught his disciples to embrace others who were bringing God’s peace to their area and trust God enough to sort the truth from error. A reasoning person could heartily agree with much of what this coexist movement member is saying. However, there still seem to be some fundamental flaws in this whole concept that need to be addressed.

* When given the opportunity to explain how much money is made and where the profits go, no response was given.

to “Does Jesus Coexist? Part I of II”