Enoch Magazine is a non-profit media movement, which documents the pulse of current culture and how that relates to love, faith and understanding. Last April, a team of 8 individuals from different cities and states joined together for an Enoch Documentary in Skid Row Los Angeles. We walked the streets day and night, spent time with the people and distributed food and water. Our focus in filming this experience was not to show what we had done, but to show what the needs of Skid Row are and how outsiders (such as ourselves) could begin to meet some of those needs.

By the end of the trip, we had met with almost everyone you could think of: Housing Coordinators, Substance Abuse Councilors, Street “Celebrities,” Homeless people, Drug Dealers, CEO’s, Pastors and Street Ministers. We learned that the first real need for Skid Row is to assist those who are already down there working everyday to make a difference in people’s lives. Most of them are under funded. Nevertheless, they have dedicated their lives to assisting the poor and the addicted, so they know what works and what doesn’t. 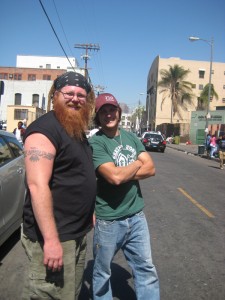 Meeting Patrick and his crew was a particularly interesting experience. As we’ve always said, our plan for Skid Row was to have “no plan.” We wanted to see how God would lead us once we set foot on the streets. But as we got out of the car and stood on the streets all kinds of stuff happened: threats to harm us, burn our car, and a woman crying and asking for new pants cause she had just urinated on herself.

We left soon after that, overwhelmed with emotion and a little fear. But later that night we regrouped, prayed, and Uli searched youtube for anyone that was connected to Skid Row. That’s how we found Patrick.

Uli found his website (www.jonahproject.org), called him up and told him our situation. He agreed to meet us the very next day and take us into Skid Row. This video shows the time we spent with Patrick throughout the week and specifically the very day we met.

*Editors Note*
It’s important to note that not only was Patrick the guy that brought us in to Skid Row, but he also brought us in WITH the camera. It was his confidence and familiarity with San Julian St. that allowed us to openly film on the streets, despite those early threats of violence.