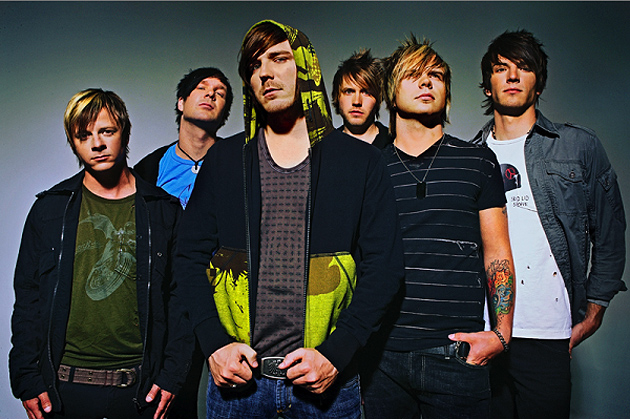 The band was “too” cool in my opinion. Why were these guys so nice, open and honest? They had never met me before… But within a few hours of hanging out with them, filming their radio gig and asking them the questions you see below, I was convinced they were worthy of our support. If you’ve ever heard a band or musician claim “it’s all about the music,” or “we want to connect with people on a personal level,” get out your pencil- or right click-copy-paste…. Because this band’s statements and actions seem to actually make those common claims ring true. – Carter Theis

Enoch Magazine) Danny, on Absolutepunk.net, you called out the fact that some bands are playing the numbers game on myspace using programs to increase “play counts” and “friends” which in turn affects record label attention. So, where do we go from here? And are there any other issues in the band/touring scene that you think need to be called out?

National Product: I think we’re screwed as a music scene… I’m just going to say it. I don’t know if radio means anything anymore, and that’s not a jab at people who work in radio because I’m right beside you in our passions for music. Its like, kids are getting signed off of fake myspace plays to get a deal, which will intern get them promotional opportunities with the label and hopefully, that takes off. I know that it still requires to be a decent band, but I’m just going to be honest and say 90-95% of the bands I’ve seen open the tours we have been on, are terrible. There is a strong difference between being on a stage and not really having great musicianship but exuding passion, and being on a stage and completely sucking and not knowing and then getting off a stage and acting like a rockstar. I’m seeing that more than I ever have ,and when I see it, I know it’s not about music. What’s sad is that with all these mediums, everyone thinks they can be famous and bless them for that, but the problem is there is no true ethic anymore.

Enoch Magazine) So many radio stations play the same music over and over. Now that you are getting exposure on the radio, do you think your music has a “radio sound?” Or do you think the stations are beginning to break lose from their set molds?

National Product: We never wrote a “radio” record with any intention so I know that is not the case. I do strongly believe radio is starting to break molds. I’m meeting more and more radio people who are tired of hearing the same Hinder song every 5 minutes. How can you not hate such boring repetition? Our lives are confined in repetition. Sleep, wake, eat, shower, work and repeat. Most of us don’t have a separation and when I turn on the radio I want something NEW. I don’t want what I’m experiencing everyday already. – Danny

Enoch Magazine) There are TONS of bands out there these days. Is it possible to break from the pack, and if so, is that National Product’s intention?

National Product: Our intention is simply to continue doing what we’re doing, but on a much larger scale to where we can completely support ourselves and future families. Then hopefully we can set sail to tour and not worry about anything but making music for people. Our sincerity will be what sets us apart or what kills us. Sometimes, the words nice guys finish last couldn’t be farther from the truth. – Danny

Enoch Magazine) Danny, on your myspace site, you say your influences are God, Life and Passion. Is there a moment or experience in your life that defines all those 3 words?

National Product: Wow, very powerful question… I’m thinking. I don’t want to give a fake answer and be like, “yeah man, me and Jesus, and life, and passion, and butterflies.” I am a human being and more so, I’m one that has struggles and I battle constantly with who I am and who I am destined to be. I have experienced all of those things, sometimes all together and sometimes none at all and sometimes one right after the other as a chaser to the next moment. What’s important is that I never forget why I have all 3.

Enoch Magazine) Danny, in our first Ivoryline webisode, you saw Nate Smith ask the band what their perception of Jesus was and how they came to that perception. Do you think that’s a good question? And what would you answer to that same question?

National Product: I was blown away by that question! Any question that evokes emotion of any kind is a good one. It had me feeling that you were asking me and at the time my heart needed to be spoken to. My answer is this because I have been thinking about it since I saw that video. Jesus is my best friend. I don’t have any imagery of what he is beyond what I was raised to know he looked like. The truth is, I don’t care what he looks like. He could be blue for all I care. What I know is that he is my father, my best friend and sometimes my enemy when I’m stubborn and need my butt kicked, (and I mean that in a loving way.) I know the feeling, and you can’t explain the feeling to someone who doesn’t understand. But I have been through the depths of hell in my life literally, and the highest points of heaven and I have found that feeling of comfort, love, the one where your body raises goose bumps and you know you’re being held. That feeling has been there through my entire life. For someone who knows that feeling, I know right now, your hair is standing up and you have chills. When you know it, you never forget it. So my perception is: all loving eternally.

Enoch Magazine) Lets talk about guilty pleasures. For me, I love “Copacabana” and “A Nice Boy Like Me” by Barry Manilow. I also LOVE the movie Back to the Future. What are you guys’ confessions for guilty pleasures in music and movies?

Danny: I like to write super pop music, in fact I just did a co-write for one of Puff Daddy’s new artists. I don’t think that makes me like, less credible, cause I don’t care really, I just like pop music. And I know it’s VERY different from NP, but stuff like that is fun and requires less emotion and more dance sometimes. Other than that, I kinda just veg out and hang with my dogs.

Stan: Funny you should say Back to the Future. I always get told I look like Micheal J Fox. I’m not sure if that’s a good or bad thing. Man I LOVE cheesy B movies and cult classics like the Puppet Master, Toxic Avenger, Flash Gordon, and last but not least my FAVORITE movie of all time Clock Work Orange. The rest of the band can’t figure out why in the world I would watch the entire series of the Puppet Master. I know its really bad but for some dumb reason I find it very funny. As for music, I love Steely Dan, and the Band of Horses. A few of the dudes frown upon it. We have this rule while in the van: If you’re the one driving you can listen to whatever you want.

Enoch Magazine) Stan “Stantera,” you seem to be a pretty chill dude, you wanna elaborate on that? And what’s “Stantera” from?

National Product: Yes, I would consider myself a pretty chill dude. What can I say, I’m a cancer, (If you believe in all that astrology stuff). I’m most likely the shyest guy in the band, especially around press, interviews and attention in general. But if you meet me, you’ll find that I truly love talking to people on a one, more than in a group atmosphere. Even back in my professional body boarding days, I never wanted the spotlight to be focused on me 100% of the time. That’s just not me. I’ve always felt most comfortable being one of the crucial parts that makes the machine run smoothly. The whole “Stantera” thing is pretty much a play on my name because It rhymes with so many other things. Stantastic, Stellystan, Stantana, the list goes on and on. The Stantera one stuck though because of how much of a “little terror” I can be when I hit the stage. I’m a pretty mellow guy off stage. You might think, “he probably takes that laidback approach when he hits the stage” Hitting the stage is complete opposite for me. I’ve always been very passionate about what I do and playing music, especially LIVE, is a huge part for me. When I hit that stage a switch turns on, kind of like Bruce Banner turning into the Incredible Hulk. To this day, I always get the same response: “Man I never would of guessed that you would go off so heavy on stage. You’re nuts!” It’s a good thing. I guess people love seeing a kick ass live show, I know I do.

Enoch Magazine) I think I’m free on June 19th. Should Enoch Magazine make the trip over to Hawaii and film your show?

National Product: YES! You should defiantly make it out to Hawaii if you can. #1. The show will be off the hook. #2 I absolutely love being a tour guide! Its so much fun showing my friends around the island and taking them to all the local spots to eat, surf, dive, kick back, etc. The rest of the boys are really big on that to. I will defiantly show you around. We can even go cave diving on the North Shore if you want. And no worries it’s not as scary as it sounds. I’m renting a beat up old car for the week and would be happy to take you around. – Stan