Enoch Magazine had the chance to hang out with the Classic Crime when they played at the Chain Reaction in Anaheim, California a few weeks before the release of Vagabonds. Watch and learn about their recent trip to Haiti and their views on Religion.

A while back we did a print interview and you can check it out below. 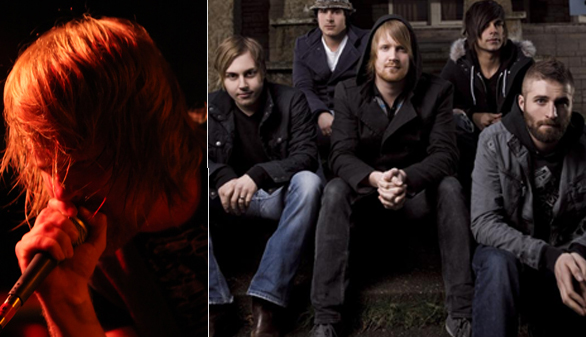 Enoch Magazine) What are the benefits of being on a indie label?

Matt: One of the big benefits is having a personal relationship with the folks at the label. Independent labels are less volatile than majors, so people tend to be employed for longer… It also helps that I live about 15 blocks away from our label. I swing by quite a bit.
Enoch Magazine) I’m sure there’re days where the band is just bone tired, what keeps you guys going?
Matt: can’t speak for the rest of the guys, but I would say these two things keep me going: My wife and the faith that ultimately I’m doing what I’m supposed to do. Whenever I step back and take a look at the big picture the truth is I’m really blessed. So if I focus on the positive things in life I feel it gets me passed the depressing things.
Enoch Magazine) If the band could record with any producer in the world, who would it be and why?
Matt: I always wanted to record with Eric Valentine… because he produced still one of the best sounding CD’s of all time in my opinion, and that is Third Eye Blind’s self titled debut from 1997. But to be honest, I love our producer Elvis (Michael “Elvis” Baskette) and we all can see ourselves making future records with him.
Enoch Magazine) Do you guys every get negative responses from people due to the fact that the band is not a “Christian” band?
Matt: Sure, we tick off a few religious folks, but I think most rational thinking people appreciate our stance. We’re always happy to talk about it.
Enoch Magazine) What do you think defines a “Christian” in everyday life?
Matt: The word Christian literally means “little Christ.”I think that means you should treat people the way Jesus treated them. Jesus hung out with people who had been ultimately marginalized by society… people who were cast out for whatever reason. He befriended them, ate and drank with them, and loved them unconditionally… I think we’d all be better off if we treated each other that way.
Enoch Magazine) What’s some of your favorite songs to play live?
Matt: It depends on the night and the crowd. Right now I like Salt In The Snow.
Enoch Magazine) Has any member of the band gotten hurt during a live show?
Matt: Yes. I’ve had a few injuries… One time Justin hit me in the chin with the head stock of his guitar, it split my chin open and bled the whole show. Afterwards I had to get 4 stitches because it wouldn’t stop bleeding. I did a backflip back in ’06 to start a show and landed on a monitor and sliced my hand open… it bled all over a white towel for the remainder of the set. I also broke my baby toe doing a back flip. I think thats one of the reasons I don’t do backflips anymore. Alan has also been hit by Justin’s guitar and it sliced open his ear. This is all very hilarious because Justin is known to move the least on stage, yet he continually inflicts the most damage. I’m sure there are more priceless moments I’m forgetting…
Enoch Magazine) Has the band ever considered having Chino of the Deftones produce your next record? (I think that would be amazing for the band).
Nah. I liked Deftones a lot, but I don’t think we’ve ever considered using Chino as a producer… We’re happy with what we have.