Filmed and Edited by Carter Theis

Enoch Magazine recently moved its team and headquarters to Skid Row, Los Angeles. We’re now more present on the streets, and we’ve been able to witness others, like us, who feel the need to travel to Skid Row. Some are here just to serve for a week, others seem to travel to Skid Row in search of a deeper understanding of God or how to love the poor and oppressed. We met up with Jon Pearson and his team of 6, when they took their spring break trip to “Ground Zero” of homelessness in America: Skid Row.

They were all students at a Bible College in Missouri (Central Christian College of the Bible CCCB), and they arrived in Skid Row with only backpacks, Bibles, tents, sleeping bags and a guitar. Some people may believe that you need to go to a conventional church to hear the word of God, or discuss theological elements of life. It’s true, you can. But I’ve never been able to sit comfortably in the Church; I like getting my hands dirty. I like connecting the dots between God’s word indoors and real faith in action, outdoors. God has been gracious enough to show me his people and his Word, even in the “darkest” places of our cities, like Skid Row. At 1:30 am, God’s Glory is exposed as Jon is willing to do an interview with us. He and his team have been living and sleeping on the streets of Skid Row with the homeless for 9 days; no showers, little sleep, lots of love. The Bible describes the “church” as the “Body of Christ.” I have to assume that special moments like this caught on film, 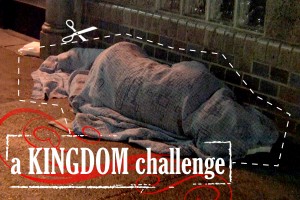 and missionaries choosing to live and stand by the poor is “church” happening in real time. By the end of the trip, Jon and his team had given away a lot of their possessions: sleeping bags, tents and clothes. We thank God for his blessing and involvement with the Enoch ministry. And Lord, we ask you to bring us more video opportunities and friendships like this , where your Word and teaching through real acts of faith can be documented and studied. Amen.