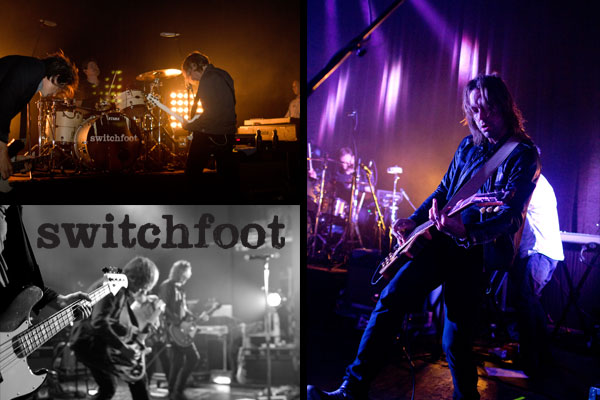 It’s been a few years since I’ve seen Switchfoot (Atlantic Records) live, so I was excited to catch them at the The Blue Note in Columbia, Missouri. They released their latest record Vice Reverses (Atlantic Records) this past fall and I wanted to see if they could capture the sound of that album live.

They opened their set with Afterlife, the opening track off their latest record Vice Reverses (Atlantic Records), and the crowd erupted with excitement. The crowd was ready to go after an opening set from The Rocket Summer. As the show went on singer Jon Foreman joked with the fans about the San Diego Padres and the Kansas City Royals. It was apparent very quick that Switchfoot (Atlantic Records) wanted to interact with their fans in a way that made you feel like you were hanging out with them in their living room. 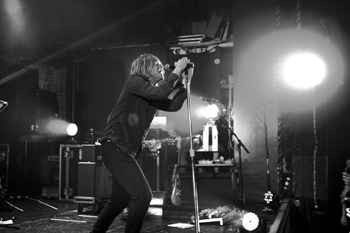 One of the tracks that stood out was Restless , track 4 off their latest Release Vice Reverses (Atlantic Records). It seemed to be a fan favorite and really showed the musical talent of Switchfoot (Atlantic Records). At this point in the show they really had the crowd behind them, and the first row of fans were belting out every word. At one point in time Jon Foreman hoped off the stage and entered the center of the crowd where he sang through a verse. The room instantly lit up with light and flashes from Cellphones and Cameras. It was at this time that Jon Foreman told the crowd that every performance of Switchfoot (Atlantic Records) is all about the fans and they are just as much part of the band as any one member.

They began Dare you to Move, as an acoustic ballad that quickly evolved into the Switchfoot (Atlantic Records) sound we’ve all grown to love. As the first notes of Meant to Live rang out the fans were ecstatic. As they blazed through the song Jon Foreman, really showed the talent and range of his vocal ability. This song was written over 8 years ago and you could tell the band still had the passion to play it just like they wrote it yesterday. 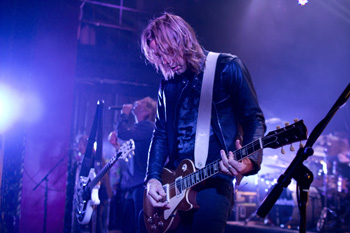 They closed their set with The Sound, Track 4 off their 2009 release Hello Hurricane. As soon as the final note rang out all band members came to the front of the stage, shook a few hands, locked arms, and took a final bow. With an ending like this one you can tell they still enjoy playing music together after all these years.

The true treat of the night happened after the show across the street from their tour bus. If you follow Jon Foreman on Twitter than you know that often after their shows he comes off the bus to play a few acoustic songs for the lucky fans that stick around. After a few tracks Drew Shirley (lead guitarist of Switchfoot) came out to join him as they closed the night with a few Switchfoot (Atlantic Records) tracks and a few songs from Jon Forman’s acoustic project with Sean Watkins from Nickelcreek.

Switchfoot (Atlantic Records) has come a long way in the last 10 years, toured the world, released 8 full length records and still can bring the Rock and Roll. They are a band that really cares about their fans. Their live show and stage presence could give any band a run for their money. Don’t hesitate to catch them in a city near you.