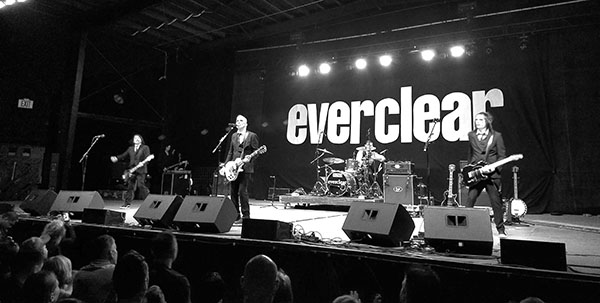 So Much for the Afterglow 20th Anniversary Tour
Crossroads KC

Everclear was one of my most beloved bands in 1995. They were billed on the first rock festival that I ever attended at the Worlds of Fun amusement park in support of their second album, Sparkle and Fade. At the time, this Portland-based trio had one minor hit on MTV with “Heroin Girl,” and I remember most of the audience assuming they were just another local band playing at the festival. Two years following that concert, Everclear was one of the biggest alternative bands in the U.S. with the release of their soon-to-become double-platinum record, So Much for the Afterglow. Now that twenty years have passed since 1997, lead singer Art Alexakis and his current supporting band members are celebrating the twentieth anniversary of Everclear’s best selling album with a nationwide tour that features all of the SMFTA songs from start to finish. It was the Sunday night of Memorial Day Weekend, and 90s alternative fans ranging from their early-20s through mid-50s filed into Crossroads KC behind Grinders restaurant in the Crossroads Arts District near downtown Kansas City. Special guests Fastball and Vertical Horizon warmed up the crowd with several of their hits from the same era; Fastball was actually one of the supporting bands billed on the original So Much for the Afterglow tour in 1997-98! As the crowd anticipated the headliner during a brief set change, Everclear finally entered into the shadows of the stage to the Beach Boys-inspired intro of the title track. Having seen several different lineups of the band for over the past ten years, I didn’t know what to expect from Art’s current version of Everclear. Although they’ve been through countless drummers, this current lineup had the
veteran guitarist Dave French since 2003, as well as bassist Freddy Herrera who has played with the group since 2009. 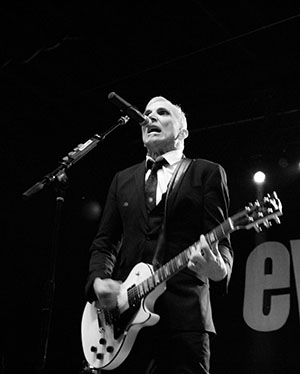 As anticipated, Everclear opened their set with the “first side” of So Much for the Afterglow. The majority of their massive singles from the record were included on that half, such as “Everything to Everyone,” “I Will Buy You a New Life,” and “Father of Mine.” Instead of continuing on with the lesser-known second half of the album, Alexakis decided to play a few of their hits from the first two records. He expressed, “Kansas City always has a soft place in my heart,” since the Lawrence, KS-based 105.9 The Lazer was the very first radio station to play Everclear on a regular rotation in the mid-90s with “Fire Maple Song” from their 1993 debut World of Noise. Other throwback songs included their first single to have a video, “Heroin Girl,” as well as “You Make Me Feel Like a Whore,” both from Sparkle and Fade. It was a smart decision to take a pause from the SMFTA set, and give the “old school” KC fans a more personal treat to the performance. Everclear finished out the rest of the set with the six remaining songs from the celebratory album, which included the Grammy-nominated instrumental “El Distorto de Melodica” and Colorfinger’s “Why I Don’t Believe in God” from Art’s first band.

The encore portion of the show started with “AM Radio” and “Wonderful” from the 2000 album Songs from an American Movie Vol. One, but Everclear had to unfortunately cut the deep-cut “Local God” from the Romeo + Juliet soundtrack since the city’s curfew was nearly approaching. As one would expect, they ended the show with their first smash hit, “Santa Monica,” and they even offered a meet-and-greet for the fans following the show. Having seen Everclear several times as a trio during their most commercially successful period with original bassist Craig Montoya and drummer Greg Eklund, as well as many times in their uncertain years that followed, I was unexpectedly impressed with this particular experience. 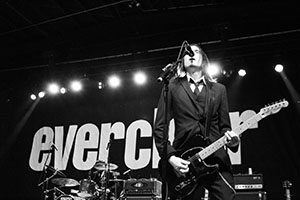 In the late-2000s, their sets consisted of too many covers and a rotating lineup that seemed a bit uninspired, but this particular performance had a great deal of passion on stage and throughout the venue’s courtyard.

With this special anniversary tour, I feel that Art and his boys have found their stride again by making an excellent decision to play the songs that put them on the map. For a band with up to six compilation albums, why would they even consider playing other people’s songs? Teenagers of the 90s grew up singing along to the entire So Much for the Afterglow CD in their cars since buying full albums was still the standard at the time. It just makes perfect sense to revisit all of those nostalgic songs from 1997, plus all of the other classics that will likely live on with Generation Y for many decades to come.

Setlist:
So Much For The Afterglow
Everything To Everyone
Normal Like You
I Will Buy You A New Life
Father Of Mine
One Hit Wonder
Heroin Girl
You Make Me Feel Like A Whore
The Man Who Broke His Own Heart
Fire Maple Song
El Distorto de Melodica
Amphetamine
White Men In Black Suits
Sunflowers
Why I Don’t Believe In God
Like A California King
Encore:
AM Radio
***Local God
Wonderful
Santa Monica