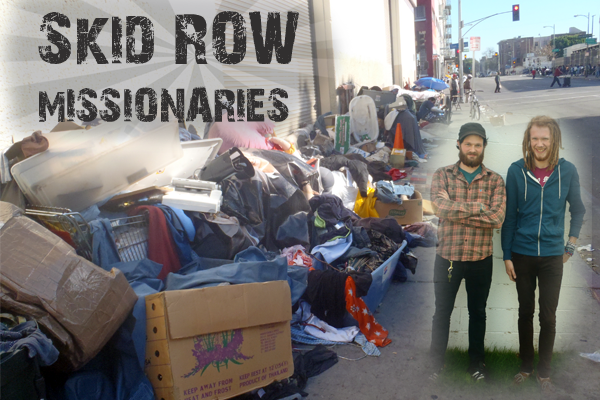 “So you guys have no money, no car, no organization to work with, and you’re backing out of Operation Mobilization, but you feel this is where you guys are led to go? I think you’re crazy, but I like you guys.”

That is what our Pastor Jim Colledge told us when we stepped into his office one morning and told him that we felt we should back out of our trip overseas with Operation Mobilization and instead go serve on the streets of Skid Row in Los Angeles.

Fueled by the prayers and donations of friends and family, Dan Beitzel and I left Monday, November 7th to make the 2,847 mile trip from Canton, Ohio on a journey to Los Angeles, California. Our purpose is to live in and among the 23,539 homeless people that reside downtown in a 50 square block area called Skid Row for one year. For the past month we have been living and serving on the third floor of the Union Rescue Mission, the biggest mission of it’s kind in America.

I’ve been coming to Los Angeles to do ministry on Skid Row for more than 2 years now. Through a series of clicks on the internet, I discovered this website you are visiting right now, Enoch Magazine. I must have watched every video documentary about Skid Row at least 5 times each, and in December of 2009 I traveled with my friend Joe Furno and our Senior High Pastor Joe Barsha to Los Angeles to be involved on the streets ourselves. The next summer I decided to move here for 3 months and work as a missionary with the Jonah Project. In August of 2010 I moved back to Canton, Ohio to live downtown in an incarnational ministry house that was started by Dr. Clinton Lowin called the Logan House.

Throughout the year that Dan and I lived there, we took a couple week long trips to Skid Row. We were both en route to travel overseas to be involved in mission work with one of the biggest mission organizations in the world, Operation Mobilization. We were in the process of raising the support we needed for the trip, when we both felt the Lord calling us to forsake going overseas, for now at least, and move to Los Angeles and be full time missionaries on Skid Row.

It was quite a huge change for us, all the support we raised got locked into an account with Operation Mobilization for us to use at a later date, we had to meet all of our donors and explain the change in direction, both of our vehicles were out of commission, so we basically had to go back to square one. We knew one thing for certain though; the Lord wanted us on our way to Los Angeles by November. So we called Nate Smith of Enoch Magazine, who previously lived with his wife Meghan at the mission for a year and a half, and through him got connected to work at the Union Rescue Mission.

The third floor is where the men in the Christian Discipleship program reside. Anyone can check into the program, they must make a commitment to be a disciple of Jesus, to abstain from substances, and must attend a number of hours in various classes such as Bible study, English, Mathematics, and Christian Leadership. Some of the men here are attending classes that World Impact offers through The Urban Ministry Institute (TUMI) to become Elders and Pastors. Dan and I have been meeting the men on the floor, participating in the classes and living life amongst them. Along with that we try to be consistent to evangelize on the streets of Skid Row, meet people, and build a presence on the block. 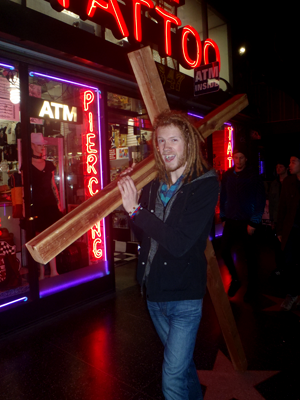 We’ve also had the opportunity to work with Carry The Cross Ministries. Walking down Hollywood Blvd with an 8 foot cross at first is a little overwhelming. All eyes are on you, and people feel obligated to give their opinion, shout it even, sometimes even while driving their cars! It’s pretty intense, but the more I got a feel for how Hollywood truly is, I realized it’s not really that different than being on the streets of Skid Row. There are still people shouting ridiculous things and muttering to themselves, still people trying to get their fix for the night, still fights breaking out, people are stumbling in the middle of the streets and the glazed look on their eyes is exactly the same.

The only difference is that they look more attractive and can afford more expensive vices. We met a bouncer at the Hollywood Hookah Lounge who, during the week, is an elementary school teacher. He told us, “On the weekdays I watch after the little kids, and on the weekends I watch after the bigger kids.” Both the Prodigal and the Older Son need Jesus to be the satisfaction of their souls, both need to drink from the same stream of life. At the end of a Friday night on Hollywood, the rich man is drinking the poor man’s drink, nobodies thirst is quenched and everyone’s passing out.

One thing the Lord has been teaching me throughout this whole trip has been to labor and seek His direction in prayer and be flexible to go wherever His Spirit leads. Any ministry we are involved in is 100% the Lord’s ministry. He’s the one that calls, He’s the one that equips, and He’s the one that gets His Gospel to the world and ultimately draws people to Himself. That is how we arrived here at this moment. Even when the future seemed uncertain, God was there, leading, providing, and through fervent prayer we felt the tug of the Holy Spirit to come to this place that is in great need for the good news of Christ, which is the power of God unto salvation to those who believe.

If you want to help these missionaries out you can donate. Just add the memo Skid Row Missions
Click to Donate Here