Show Us the Straight Way 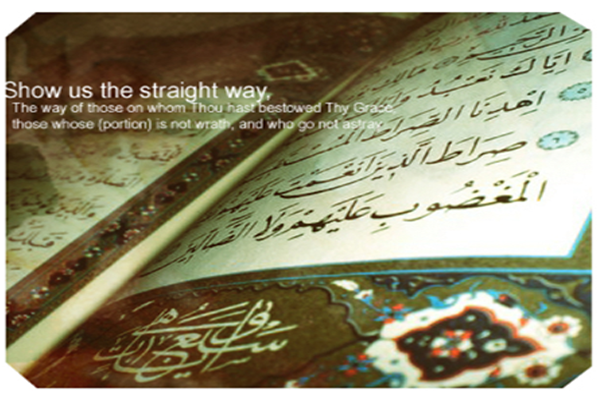 This article was written by a missions pastor of a small baptist church.

-Al-Fatiha, “The Opener” from the Qur’an; Translation by Abdullah Yusuf Ali

After all, who else can show men and women the straight way except God? We live in a world with distractions on every side. The current New Hope sermon series, American Idols, is all about how we still try to make our own path to follow. Yet our own path is never straight but always crooked and ends in emptiness and misery. As Jesus puts it in the Parable of the Prodigal Son in Luke 15, we can swerve towards the way of the irreligious, immoral, younger brother who threw away his father’s inheritance on crazy living; or we can be lured towards the way of the religious, moral, elder brother who despised his father’s generosity toward the younger brother, insisting that he deserved anything he wanted because of his own hard work.

Jesus says, “Enter by the narrow gate. For the gate is wide and the way is easy that leads to destruction, and those who enter by it are many. For the gate is narrow and the way is hard that leads to life, and those who find it are few” (Matthew 7:13-14). Having lived 30 years of life, I believe Jesus’ words are true. Few find the straight way. The infinite number of world- views out there to believe in and follow are exhausting and overwhelming.

Here’s a window into my own search for the straight way. I grew up in a Christian home, raised by American Baptist parents. My mother grew up Mennonite and my father grew up Catholic. How they became American Baptist is still a mystery to me. I was involved in the Navigators para-church campus ministry through college and attended Grace Baptist Church (an independent Baptist church). I’m currently on staff at a Southern Baptist church, New that you would probably never know was Southern Baptist unless I told you (so this may be a surprise to some who are reading).

I’ve had many Catholic friends; I even married someone who grew up Catholic! Yet I tend to stick close to the Protestant view on theology (the study of God) and ecclesiology (the study of the church). As a Protestant, however, I’ve not really explored the Presbyterian view at length, but yet I’ve met many Presbyterians whom I really respect even though they baptize infants (which doesn’t jive with my current understanding of baptism). A few years ago, one of my close friends in campus ministry later went on to study the Greek Orthodox church and eventually left his Protestant roots to follow the Greek Orthodox path. Maybe this whole Protestant path I’m on isn’t quite right, I thought. I had never even considered the Greek Orthodox view. Wow! I don’t have time or energy or intellectual capacity to study all these worldviews and denominations within Christendom to know which way is the straight way.

On top of all that, I’ve also been exposed to many world religions. In college I began meeting people from all over the world who informed me about the many competing worldviews out there beyond Christendom. My Japanese friends said their parents were Buddhist or Shinto yet it seemed to me that the functional god of Japan was money (which is also my observation of many Americans). My Indian friends tended to have a Hindu worldview that seemed very similar to many Americans’ worldview (that there are many paths to God, just pick one and go). My friends from the Middle East tend to embrace Islam, a monotheistic religion. They strongly believe that there is one God but that we must please him through our works.

That worldview actually reminds me of many Christians I know (often even me) who are desperately trying to please God through their actions. Even within Islam there are many different sects, 73 to be exact. Should I explore all of these options? These experiences all led me to wonder: what if I grew up in another part of the world, what path would I follow? My mind whirls as I recognize that I don’t have the time or brainpower to get to the bottom of this list of possible paths. Yet my heart longs to know the straight way. If this isn’t confusing enough, behind all of this there is also Satan, who is blinding the minds of unbelievers so they cannot see the straight way (2 Corinthians 4:4). How can we find the straight path? We can’t.

At least, not based on our own intellect, experience, emotions, perspective, or effort. It’s impossible to find the straight way on our own. Who then can be saved? This question sits heavy. Jesus says, “With man this is impossible, but with God all things are possible” (Matthew 19:26). Therefore, we must pray to God that He will show us the straight way, something only He can do.

Every Muslim verbalizes this prayer out loud 17 times a day. Who knows how many times this prayer is being uttered in people’s minds or on the tips of their tongues (including yours and mine) right now? As my mind whirls and my actions are imperfect I long to know the straight way. God answers me when I pray this prayer by way of reminder: what I God has clearly shown us the straight way. The straight way is Jesus Christ! He is the Gospel, the Good News! Jesus said, “I am the way, and the truth, and the life. No one comes to the Father except through me” (John 14:6).

Jesus is the only one who walked on the straight way perfectly. He never squandered God’s inheritance on crazy living like the younger brother. He never despised God’s generosity towards immoral people who long to be in the family of God. In fact, Jesus was the older brother who instead went after people like you and me who were (or are) far from God to bring us back to God through the straight way. Jesus cut a clear, straight way to God by the perfect life He lived, the death He died, the power He demonstrated in His resurrection, and the prayers He offers on our behalf even now at the right hand of God (Romans 8:34). The gallons of animal blood that flowed in Israel from the Temple to the streets of Jerusalem did not pave a straight way to God but pointed to the true straight way: Jesus (Hebrews 10:11-14).

I don’t have to look any further than Jesus. He is the straight way. The Qur’an itself hints at this when it records God saying, “And Jesus shall be a sign for the coming of the Hour of Judgment: therefore have no doubt about the Hour, but you follow me: this is a Straight Way.” (Surah 43:61)

In the name of God, Most Gracious, Most Merciful. Praise be to God, the Cherisher and Sustainer of the Worlds;
Most Gracious, Most Merciful; Master of the Day of Judgment.
You do we worship, and Your aid do we seek.
Thank you for showing us the Straight Way, Jesus!
The way of those on whom You have bestowed Your Grace,
Those whose portion is not wrath, and who do not go astray.
Remind us of the straight way because we are quick to forget;
And help us show others the Straight Way so that our family can grow.
Amen.

to “Show Us the Straight Way”