The exciting news is that Enoch Magazine has been asked to accompany and document the Navigator’s outreach trip to Louisiana’s notorious Angola State Penitentiary. If this sounds a little scary to you, it should, because when I first heard about it, I got that “Oh no, here we go” type feeling. Upon doing some research, I found Angola State is a prison with a history of extreme violence. It sits on the very same land that was once a slave breeding plantation and then became a brutal prison after the civil war. 20 yrs ago, Angola was a prison full of fear, bloodshed and hopelessness. 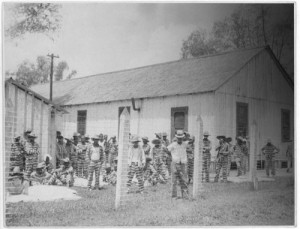 A prisoner’s average sentence in Angola is 88 yrs. It’s the largest maximum security prison in America, where half of the prisoners are murderers, and 90 percent of it’s inmates will die there. But during my research, I also learned why the Navigators organization had asked us to accompany them to this prison….because God is restoring life and righteousness to a place no one would have expected him to. A warden by the name of Burl Cain was hired there awhile back and he was a Christian. Burl believes his opportunity to take over as Warden at a “failed prison” was a divine intervention. He began training prisoners with life sentences to be Chaplains, hosted daily sermons and discipleship programs and over time, the prison has done a 180. It’s now a community of Godly men and brothers in Christ. The revival of Angola State Penitentiary is truly a “one man can make a difference through Christ” story, and Enoch Magazine feels honored to witness and document a slice of God’s Glory behind bars.

So what’s the plan? What will we be doing there? Well, there’s a lot of people and organizations that we will be meeting and working with. Most are new to us like Navigators, Awanas, and Returning Hearts Celebration. They have a lot of events planned over a 5-day period. But Enoch Magazine will also be reunited with 2 familiar friends: Sean Hulin and Ryan Dobson of Kor Ministries in of Bolder Colorado. These guys handle a lot of the youth ministries formerly run by Ryan’s dad: James Dobson and the Focus On The Family empire. Sean and Ryan have been an encouragement to Enoch over the years and I’m excited that God is allowing us to unite. In fact is was Sean, (Ryan’s right hand man) that recommended us to film this event.

Events that we will be documenting include: Cell to Cell ministry, Men’s Prison Chapel, Returning Hearts Celebration Dads Orientation, Art Workshop, Music ministry, Visiting Death Row, Angola’s Got Talent, Don Piper, Worship Service, Malachi Dads Graduation, Ryan Dobson’s radio show on prison airwaves, Gospel Jazz Concert, Painting Competition in Prison Yard, Bible College, and a donor reception that promises fried fish at the Ranch House. So you can be praying for me (Carter Theis) as I try to document as much as I can in a way that displays the Glory of God and real faith in action. We’ve been praying to God, asking him to introduce us to prison ministry, and it looks like this is the beginning of those prayers being answers. Lord willing, in 2 years, Enoch Magazine will not only be heavily invested in homeless ministry, but also serving and loving those in prison too. “For the Bible Tells Me So.”

Below is an AWESOME 2-part series that I discovered when doing my initial research on the prison. Maybe one day, God will help us to make videos as good as these: