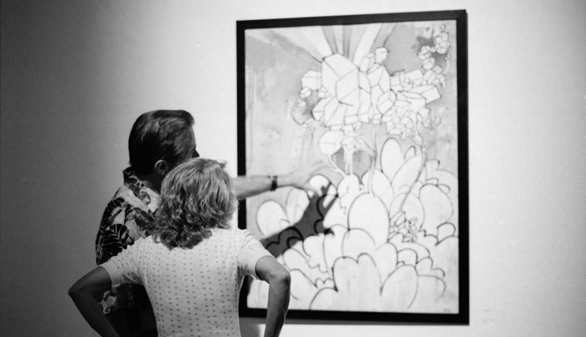 I heard a pastor in Arizona say the goal for his church was not to get bigger and bigger, and then build a giant building, which hosts 7 services a week. Instead he talked about the importance of staying mobile and venturing out “to all nations” like Jesus said to do. I like this idea. Church service is ok, but at some point you gotta get out in the real world. Otherwise, what were all the church lessons for… free coffee and bagels? New relationships and interesting conversations are waiting, just around the “real world” corner.

Of course it’s easy to say, “Go out into the real world,” but how does one do it? When, and why? Well, that’s what Enoch Magazine is here for. We try to cover individuals that are stepping out into the world with their talents and gifts. Some of these individuals are Christians, some are not. Ultimately, it’s their actions and treatment of others, which we’re focused on.

In Charlotte, NC, locals will tell you they have a great art scene, because they have a gallery crawl every month. But guess what: So does every other major city in the US. But by other city’s standards, Charlotte comes in last. For example, each month Charlotte’s gallery crawl features the same art from the month before which never sold. How fun is that? It’s like playing the same bad movie over and over until the theater sells out. And with fresh art lacking, every other aspect of this creative exploration seems to dwindle. The art gets more “desperate,” there are no traces of DJs or interactive media and the wine flows less and less.

I often expressed my frustration to Eric Hurtgen regarding this artless situation. Eric’s a local artist, talented painter and good friend. He agreed we could probably do a better job compared to what was currently being offered locally. We did do some vision casting and talked to others about our ideas, but it wasn’t until Eric woke up one day and decided to actually do it, that the vision was put into motion! He rented the largest and nicest gallery in the arts district for one night (the night of the gallery crawl).

With the date set in place, Eric proceeded to contact all his artist and musician friends. But keep in mind; these were not veteran artists he contacted. Instead, Eric invited the poor and undiscovered artists; the artists that rarely are given the opportunity to show their work. For some of the artists, Eric’s show was to be the second show they had ever participated in. All in all, Eric united 2 clothing companies, 2 DJs, 8 painters, 1 jewelry designer, 1 ceramics potter and 3 bands. With this many people involved, the show sold itself and word got around with little effort. Of course there were flyers made and emails sent out, but I think what really made this event work was the variety of people involved and the fresh attitudes that were included. Never before had Charlotte, NC residents seen such a burst of creativity, updated to the current trends of that decade. Anyone and everyone was welcome. And as soon as the doors opened and the music started, the large, rented space began to fill with people whom we did not recognize! Eric split the Gallery’s rental fee 10 ways with the other artists, so there was no real pressure to re-coop costs…. just have fun. I asked Eric, “Why throw an art show?” Here’s what he had to say:

“Well, it was a good time, really. Especially with DJs, music and friends. If Christians should be good at anything it should be throwing parties: inviting people to come out, opening up the doors and loving on them. I think Jesus was this way. Early on, it seemed he was always going to someone’s house, hanging out with the “down and out types” as well as the “uber-rich crowd.” He spent time with the “super-religious” and the “barely religious at all.” So, I like the idea of throwing parties where pretty much anybody can come and hang out and feel comfortable. Art shows are a good way to do that. Here in Charlotte, such a wide variety of people come out to the gallery crawls, so its already a good time. I guess the second reason is that I have some artist friends whose work I feel deserves to be seen, whose music deserves to be heard. And I think the city of Charlotte should be given the chance to see and hear something new and fresh!”

Enoch Magazine loves when someone breaks out of their shell and tries something new. That’s why episodes 1 and 2 of this series explain how to build your own canvas, so if anyone wants to paint something, they now can do it in the best and most efficient way. More information about Eric Hurtgen and the art show can be found at;