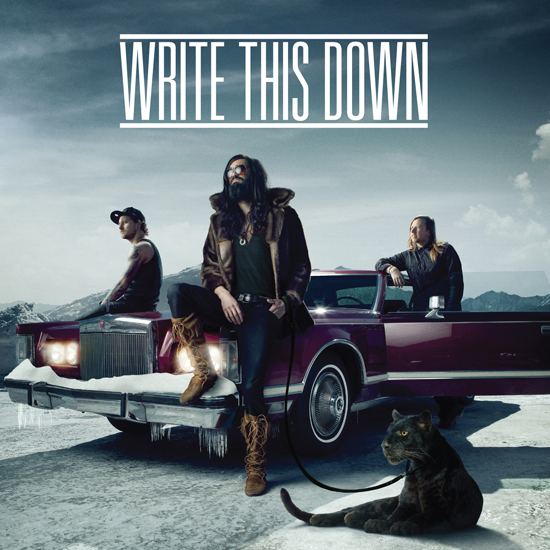 Write this down gets the award for the best Album Cover of 2010. The band is surrounded by snow, ice, an amazing car, and a freaking tiger on the cover. Simply Creative and amazing.

Write this Down brings the rock straight forward with a mix of pop and hardcore. It has enough screaming for the hardcore and pop for the rock crowd. With reminiscences of Brand New, Underoath, Emery and Foo Fighters this band has put out a record that already displays maturity for a debut release. Produced by Rob Hawkins and recorded in Nashville these 3 guys are ready to bring you a release worth your money.

The album opens heavy with “Alarm the Alarm’ which immediately drew my ears in. The power, the lyrics, and guitar are mixed in melodic melancholy. The chorus has so much force behind it , their live show could only display it better. Track 2, “Despite your Valor” starts off heavy but is quickly broken down with an acoustic guitar and then right back into the rock and roll. I love it.

“Hand Grenades” has a simple intro that builds up slowly until 33 seconds where a listener is starting to see where the song is heading. The Bridge has the lyrics “we’re growing and we’re still building character” which describes the progression of this song. It builds to an ending that leads you right into the next track. “Center of Attention’ shows the simplicity that a 3 piece band often has to offer. I’ve always loved 3 piece bands because they are limited with their music instruments so they have to set the bar higher on creativity. The lyrics “Sweet Jesus Carry Me’ show that the band holds true to their faith in their lyrics and are using their voice on this album to give a positive message.

The piano driven track ‘Citadel” is beautiful. I would not have expected to hear the piano on an album like this. It’s great to see bands taking a chance to step out of their genre and try out the mellower side of music. Although the song is slow and mellow at the 2:55 mark all hands on our deck and they are back to the rock and roll. It ends with the piano just like it began and definitely could be the second single from the record.

“Redemption” has a chorus that every kid could raise their fist to. The record ends with the acoustic track “Heaven and Hell.” Write this Down has truly impressed me. Their music is creative and inspiring. I am so intrigued by this record I can’t wait to see them live. I definitely give them the Enoch Stamp of Approval.