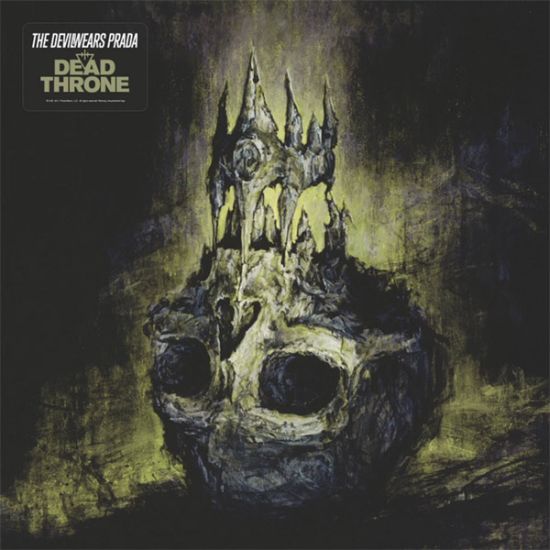 As a band who was once apart of the “metal-core trend”, it has been a relief to see The Devil Wears Prada (Ferret Music) consciously move away from cashing in on the latest fads, in order to stay true to their roots.

This all began back in August 2009 when the band released their first ever EP, entitled the “Zombie EP”. This was the album that scared all the tweeny boppers away. Despite having just 5 tracks and clocking in at just over 20 minutes, this was a deadly wrecking ball, exposing all the girly, “heavy” bands who stay within their trendy bubble. If The Devil Wears Prada (Ferret Music) followed their debut release “Dear Love” with the Zombie EP instead of “Plagues“, they would STILL be teetering on the underground circuit. Yes, it is that brutal.

Fast forward to a year later, and we have The Devil Wears Prada’s (Ferret Music), first full length since 2009, entitled “Dead Throne“.

The Devil Wears Prada (Ferret Music) spent that time honing their heaviness and overall musicality. One peer into “Dead Throne” and it is clearly evident hat they have dropped the cliche “metal-core” tag, and gone for a thrashier, aggressive tone. The breakdowns and melody vocals still remain, however are used more sparingly. In other words, The Devil Wears Prada (Ferret Music) have matured their sound and zeroed in on their strengths.

I know, I know, literally every band says that their latest record is their most “mature” and “best” record to date. At the risk of sounding cliche, this is exactly what happened with “Dead Throne”.

Released in September 2011, this album set a firestorm on the Billboard 200, scorching a trail right on up to #10, which is an unheard of feat for a band as heavy and non-commercial as The Devil Wears Prada (Ferret Music).

Now onto the record; the theme on “Dead Throne” is anti-idolatry; worshiping false idols or composing idols out of things that shouldn’t be revered in such a way. A common (and biblical) concept, however one that is unique in the metal world.

Now I have been a TDWP fan since their early days; my first show was in fall 2006 when they opened for Silverstein and Aiden. I have stuck by them ever since, with a watchful and unbiased eye. As any fan will tell you, each album has seen a noticeable progression, however after the band released the shockingly heavy/aggressive “Zombie EP“, fans were eagerly awaiting what “Dead Throne” had in store for them!

So when September 2011 rolled around, i went to Best Buy and purchased the album. That was five months ago and I STILL have it in my car stereo! This album is TDWP’s most cohesive and daring album yet. Combining elements of hardcore, thrash, and even punk rock into their music their maturity, skill and originality has definitely taken a jolt in the right direction. With 6 members in the band, including a keyboardist, it is no surprise that the tracks include multiple jaw dropping layers. Each time you listen to the record, you will find new sounds that you didn’t notice before.

This album rules. Fact. “Dead Throne” doesn’t try to be something it is not; it doesn’t stray to far from their original sound, yet at the same time it takes a many unorthodox steps into new realms within each song. Despite most of them being around the 3 minute mark., they pack a bigger punch then most 5 minute songs! Any excess or repetition has been thrown out indeed!

This album also features their first instrumental track, entitled “Kansas“, which easily ranks as one of the most memorable on the album. With “Kansas” and its companion piece, entitled “Chicago”, their are definitely some emotional tracks on the album, those two being the most notable. Each song has their own identity.

What is really astounding about “Dead Throne” is that every single track has its own sound, yet when played in order, they all fit in like perfect like puzzle pieces. Every track showcases each members creativity; the pummeling drums, intertwining guitar riffs, throaty vocals and ethereal keyboard sections; which personally I am in love with. The keyboard sections on this album are also more prominent, adding a gloomy yet ecstatic vibe, creating an out-of-this-world atmosphere amidst all the metal and mayhem!

This album does what The Devil Wears Prada (Ferret Music) does best, and than some. This album definitely, for sure as i am living, stands the test of time. I have been jamming it nearly everyday for 5 months and it still is as inviting as ever!

If you love metal with substance and originality that will stand the test of time, go grab “Dead Throne!!”