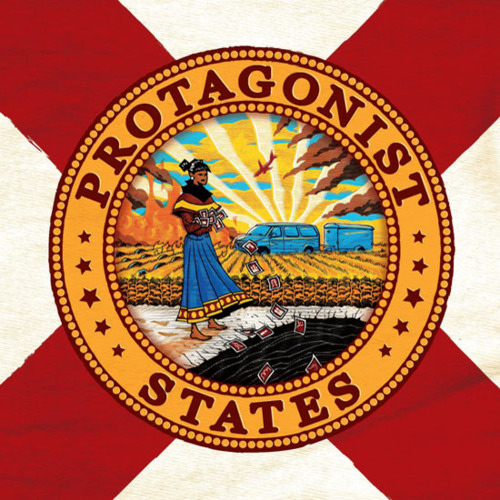 Some bands just get it. They put out great record after great record. Their sound doesn’t waver much and they seem to get better and better with every release. Protagonist (Paper + Plastick Records) do just that. It’s one great punk rock song after another.

The States Ep opens with the title track “State.” For the first few seconds its slow and kicks right in with a guitar solo reminiscent of 1994 Nofx. The guitar sounds so real you can tell it hasn’t been overproduced and in my opinion ruined. It’s fully captured and has a live feeling that makes it stand out. This track is fast and I must admit it’s the perfect opener. At the 1:31 mark the guitar is flying and the lyrics began to talk about the death of the American Dream. If there is one thing Punk Rock always seems to shatter is the search for the American Dream. I love the idea that maybe the American Dream doesn’t exist.

Turnbridge begins with a simple guitar interlude and once again attacks a listener with a punch. The bass line stands out on this song and is captured perfectly. It seems more and more we are seeing better bass playing in Punk Rock releases. The drums drive home the chorus and the intensity never slows down the entire song.

Destination Desolation is classic. It reminds me of older Good Riddance meets Rise Against. It’s full of anger and once again an intricate bass line. I’m impressed.

Sirens brings you Pennywise meets Bad Religion. The vocals really carry this track. I’m 4 tracks in and the intensity is still going. The bridge captures a listener ears and leads right into a guitar solo that’s simple but captivating. This track comes in at 2 minutes and it’s over before it began. It’s so short you just might catch yourself giving it a 2nd listen.

The last track of States, The Stranger the Boy Became closes out the ep right where the album began. It’s my favorite track on the record and is a simple song about how much Pennsylvania sucks. The bridge is the slowest part the ep ever reaches with just a guitar breakdown. The guitar solo is ever slightly there behind the vocals as the ep comes to a close. It ends with simple vocals and guitar mellowed out. I like that they chose to end the record this way. It’s as if it ends on a serious note about whether the singer can ever return to Pennsylvania after being gone 15 years.

If you like the Protagonist (Paper + Plastick Records) Debut Record then this release won’t let you down. It’s modern day punk rock in it’s finest form. It’s not that pop punk crap that the industry continues to throw at us. It’s real Punk Rock and it’s great. The artwork is amazing, too. Buy this Record, you won’t regret it.