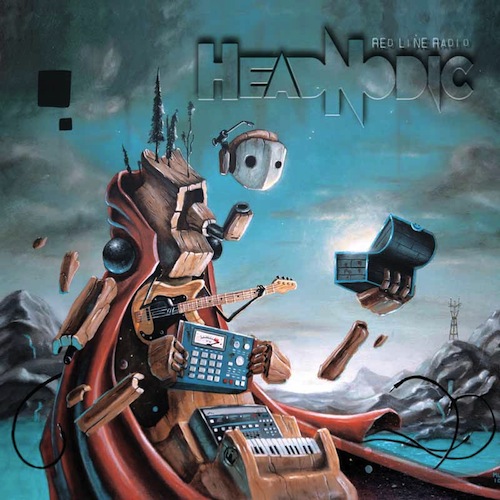 Red Line Radio (Brick Records) by Bay Area Producer/Musician Headnodic is an recent gem that breaks through regular hip hop barriers. Headnodic is the producer of the Crown City Rockers, The Mighty Underdogs, Megaphone, and many others. I first came across Headnodic while digging through records in Portland OR. I would find these amazing 3 song vinyl singles under the title MISSION. The beats were organic and smart. Instruments and samples were authentic and plentiful. Later, when MISSION changed it’s name to the Crown City Rockers, more amazing music and beats were added to my collection, and I became more educated on who was producing the sound I crave.

Headnodic, a trained musician form the Berklee College of Music in Boston, now currently resides in Berkeley CA. He works with all plethora of dope emcees and groups, such as: MF Doom, Dj Shadow, Damian Marley, Brother Ali, Lyrics Born, Tash, People Under The Stairs, Gift Of Gab and Del The Funky Homosapien. His new album Red Line Radio, features (from what I can count) 30-40 different artists and groups, including some of my personal favorites: DJ Vajra, Othello (of Lightheaded) and The Jazz Mafia Horns.

The album art for Red Line Radio seems very appropriate, as Headnodic seemingly captains a ship of spontaneous rhythm and melody into uncharted waters. Red Line Radio is a collaboration or artists, musicians, samples, cuts and instrumentals to expand your hip hop appreciation. Ahead of the game and deep in the pocket of REAL production, this album unites underground Emcees, seasoned veterans, musicianship, and golden era sound.

Each song is different, as it seems the slate was whipped clean, and creative elements fell where they may. Early stand outs for me included, track 3: Movin On Up (feat. Latyrx & Kat ((010)), track 4 Surgeon General (feat. People Under The Stairs), track 8 The A M (feat. Othello, Aima & DJ Vajra), track 12 The Mush (feat. Moe Pope & Benzito the Village President), track 14 Dirty Diamonds (feat. Moe Pope, Bru Lei, Very, Jern Eye, Night Klubber Lang, & One.Be.Lo)…But I also found myself going back to sounds I didn’t initially vibe with; understanding and appreciating them more as the album played on. I also became a fan of Moe Pope from this album. His delivery and verbal dictation is great!

Headnodic also has all kinds of great stuff to download for free!!! Check him out and stay connected with what’s brewing out of Berkeley, CA. and the Bay Area:
http://headnodic.blogspot.com/
http://www.bjorkremixes.com/megabjork/
BUY the ALBUM HERE: http://www.undergroundhiphop.com/Headnodic-Red-Line-Radio-Audio-CD/BRK104CD/