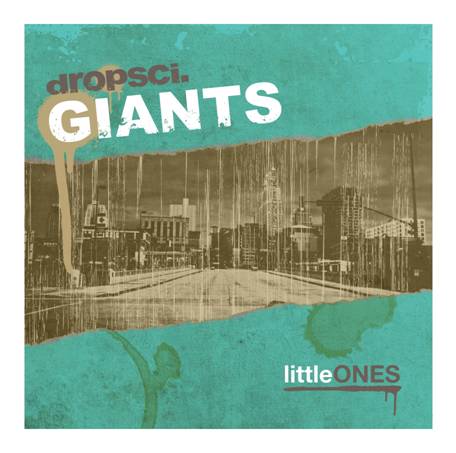 Here’s a new hip hop album that was sent to me last week from the emcee Paradox. It’s the debut project from the dropsci GIANTS crew, consisting of Common Child (Eugene OR), Jupiter 7 (San Francisco), reSEARCH (Tennessee), and Paradox (Texas). From what I can tell, these guys worked over the internet, emailing each other beats and vocal tracks. The album is called “littleONES” and features a different producer on each track (including Beat Rabbi of Deepspace5, Sean P., DJ Frantic, SameOldJake, and others) and guest appearances from Wonder Brown of Scribbling Idiots, Nickels of Lojique/Oldominion, Sean P., MellowDrumAddict, and Micronaut. Although there are only 8 songs on this EP, it captures a solid underground hip hop sound that I enjoy, rep’ing full bodied production, classic dj skill scratching, and lyrics pointing straight to the Kingdom. It’s exciting to know that Christian MC’s around the country are uniting and creating dope music like this.

Before hearing this record, I was not familiar with Common Child or reSEARCH. But they rock the mic with grace, calling out issues in both the hip hop world and the Christian lifestyle. My current favorite emcee J7 (Jupiter 7) is on this EP. There’s something about J7’s voice that I can’t get enough of. You’ll know when you hear it, cause he’s got this raspy, ‘could care less’ voice that delivers a myriad of visually creative metaphors. When he starts rocking the mic, it’s like flying through a roller coaster of ideas and imagery.

This EP has some funk elements in it now and then, but overall, it’s carries a more underground tone. On some tracks, like “hauntedHOUSE,” and “blueDAWN” the sound is darker and builds a feeling like you’re in a thriller movie. “farREACHING” has a super sick melody that uses this guitar/trumpet anthem from a 60’s western movie theme song. “lionDEATH” is by far my favorite track (listen to it HERE). It has this distant guitar/keyboard melody that is accompanied with a deep pulse of bass electricity that is just super fresh. I’ve never heard anything like it. Signalias is the producer, so MAD props to him and the killer cuts by Nickels. I’ve met Nickels before….we did a show together back in ’03. What up Nickels? You still stacking change on those needles? This album is worth supporting, and it’s only $6.99!

It’s for sale at Sphere of Hip-Hop! (All pre-orders include a free 16 track mixtape.)