Dropkick Murphys – Going Out in Style 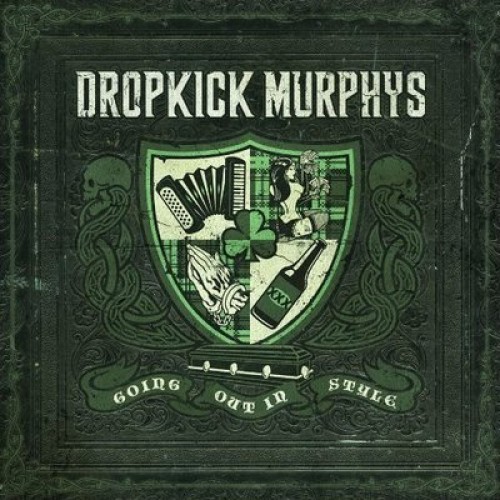 When anyone mentions this band it’s hard to see why anyone wouldn’t like them. With the release of “Going out in Style” The Dropkick Murphys are ready to make a fan out of anyone. The record begins with “Hang em High” and slowly builds up to the classic sound that so many fans have grown to love. The guitar sounds so full on this track compared to some of their previous releases. The chorus is in your face with harmonies, bagpipes, and everything one would expect from these guys.

With dual vocals punching your ears “Going Out in Style” is impressive. This song could be the new anthem for Saint Patrick’s Day. It’s simply about going out in style and not caring what others think. The song has such a driving force it’s over before you even realize it and your hitting repeat for another round.

“Memorial Day” is my favorite track on the album and as weird as this may seem it reminds me of Reel Big Fish. It’s catchy, upbeat, and simple. If you listen closely you will notice a subtle bluegrass feeling throughout the song. I love “Broken Hymns”. The mandolin drives the intro and carried the song. This song has a classic Irish feel and tells a story that makes me wish I was Irish.

“Deeds Not Word’s” seems like the obvious song that they would open up their set with. It starts slow and builds right into the Irish Punk Rock these guys are known for. The gang vocals on the chorus are exactly what you would expect. Although, overall generic this song still rocks.

“Take me Down” starts off with lyrics any Corporate America employee can relate to and should be the 9 to 5 anthem.

So grab a glass of whiskey, sit in your favorite chair and put on this song after a long work day.

The album comes to a close with “The Irish Rover”. So often I see bands put the weakest track as the closer but Dropkick Murphys have beat the odds and ended with the perfect Irish Anthem

Overall, this album is the perfect companion for St Patrick’s Day. It makes you crave whiskey, want to be rowdy, and absolutely kills your desire to get any work done after you’ve listened to it. Whether your Irish of not this album is one of the better releases of 2011.