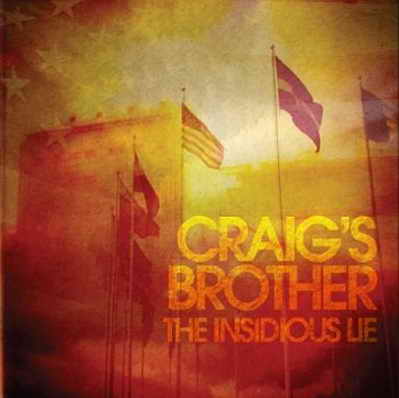 I’m tired of seeing so many bands not get the credit they deserve. 2011 has been a year of generic, overproduced, and uncreative records. With all that said one band stands above the rest, Craig’s Brother. When it comes to 90’s Punk Rock, I’d consider myself an expert. I’ve been to hundreds of punk shows, own the fat wreck 90’s discography, and still love every Bad Religion Record.

It’s been 7 years since the world has heard from Craig’s Brother. An email here and there, a demo, or a quick video and finally they have released the masterpiece of 2011, “The Insidious Lie.”

The record begins with “Freedom” and gives you a total kick in the balls. It’s fast with the perfect 5 second breakdown of guitar and lyrics at the 1:09 mark with the lyrics “This body is done I’m prime for a new one”. I want to note right away this album keeps lyrically in line with the others and shows the struggles and views Ted has on Christianity. I’ve always liked this about Craig’s Brother, their lyrics have made me think and respect Ted for being so honest.

Track 2 “The Mistake of Caring” is the anthem for every guy that’s ever opened up his heart to anyone. It tells the story of caring for someone and in the end they screw you. The lyrics drive this song but it opens up with a guitar riff that sure to draw a listener’s ear in. Right before the guitar solo Ted say’s “right on” and it simply makes me laugh. I don’t know if they left it in as a joke but it’s awesome.

“Thousand Yard Stare” is all about war. I’ve never served in the armed forces but war sucks. It takes lives, money and seems to always leave someone hurting. The harmonies that exist during the chorus are perfect. My favorite part is when all instruments cut out and it’s just harmonies with “I can see but I just don’t care”. The bridge is reminiscent of “Lost at Sea.” On the title track “Insidious Lies” the first verse is driven with the masterful bass work of Scott Hrappoff. Scott, hats off to you for keeping it real.

The depth of writing is always apparent with the lyrics of Craig’s Brother. “Party Girl” parlays to this perfectly. This song tells the story of a girl throwing away her life to party. The bridge is the best part of the song at the 1:34 mark. I love it.

“The Problem of Evil” has what I consider to be the heaviest chorus on the album. It’s layered with vocals and guitars that hit you like a tsunami. This track may be Ted’s best vocal work on ‘The Insidious Lie.” The ending of this track leads right into “The Aaronic Blessing” the final track of this masterpiece. It’s my favorite track lyrically on the album. It tells the story of Jesus in Ted’s eyes and lets us take a view into the idea of him wondering if there will ever be peace on Earth. I can relate a lot to this song as I often wonder about the evil that exists on Earth but yet the promise that its all part of God’s plan.

Although not on the official release “Crutch” , available on the vinyl release, is about alcohol. It has one of my favorite lines on the album “The chemical reaction for an instant asshole just add alcohol.” Ted compares alcohol to Dr Jekyll, Mr Hyde, demons and just gives an honest perspective of alcohol in so many people’s lives.

Overall this is and will be the best record of 2011. I know it’s early in the year but I am putting the album at the top of my list. Craig’s Brother has put out what may be their best record yet and the best kept secret of 2011. The lyrics are top notch, guitar work amazing, bass lines smooth, and drumming fast as ever. Buy this record and let your friends know Craig’s Brother is taking over the world.