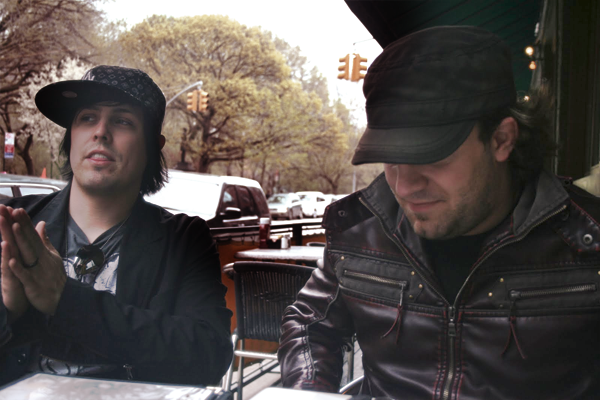 The Suicide Denial is a band we don’t know too much about. But our paths and connections crossed a few times, and we decided to see what’s up with these guys. Their music is dope and their videos are creative. So here’s 7 questions with singer/guitarist Chad Gerber.

Enoch Magazine : Your name is Suicide Denial, you write songs entitled “I’m OK” “Money” “Your Hell” and “Medicate.” I’m not seeing a lot of “Baby I miss you Type songs. So what’s going on with you as a band and you guys as artists?

The Suicide Denial – Chad Gerber : haha, I think “baby I miss you songs” totally have their place, but as a band we’re aiming to sort of dig a little deeper into problems I think most people are carrying and are maybe totally oblivious to. So many songs out there are about feeling good and not being accountable to the pain we all are carrying which is usually placed on us by others. Then those who acknowledge it can’t seem to find anyone else they can relate to because everyone is too busy trying to bury it. This album airs some personal dirty laundry, and as a band we want fans to know that it’s ok to face down problems, even if you can’t beat them first go. The point is to try, and to suck it up and own up to damage caused by others that pulls us down, and vice versa. There’s strength to be gained in tackling the darker things in life, I think.

Enoch Magazine : We never ask a band how they got their name….unless the word “Suicide” is in their name. So “How did you get your name,” and is it intended to do more than be a name…because “Suicide Denial” is also a statement, correct?

The Suicide Denial – Chad Gerber : I used to have a totally different, soft squishy answer for this question, but in the past couple years I’ve had the pleasure of getting to know some amazing people from a charity called To Write Love On Her Arms and I started to realize just how bad suicide is getting out there. A while ago the actor Owen Wilson attempted suicide and failed. When I saw that I thought “I can really relate to that”. My life was awful at the time. Then I started thinking about how he was basically denied his suicide, and how some people are suicidal every day of their lives, but never go forward with it. Many people are committing acts of Suicide Denial. The fact Owen Wilson was denied his suicide, and that many people deny themselves suicide is an amazing, great thing. So technically this band is the result of The Suicide Denial…….. does this make any sense? I feel like I’m writing a riddle. I should have gone with the soft squishy answer instead of the book explanation.

Enoch Magazine : Before starting Suicide Denial, it says you worked with Aloe Blacc and members of Guns and Roses. I’m a huge Aloe fan and Nate is a hug Guns fan. Tell us each something about these artists from behind the scenes.

The Suicide Denial – Chad Gerber : Yes, Aloe Blacc, I owe him. I met him my very first day of moving to Los Angeles years ago and he gave me a business card. One of those “I make beats” type business cards or something haha. We started working on my old music in his studio, and I would play guitar on some of his projects, hit up each other’s shows, that whole thing. He hooked me up, I don’t even think The Suicide Denial would exist if it weren’t for him actually. When stuff started really taking off for him this past year with the “I Need A Dollar” song I was thrilled. One of the hardest working, most genuine people I know. It’s also cool to see how much his style has changed since our early days in his home studio. He’s totally killin it now…. even more. Guns and Roses dudes are totally different haha. I worked with Teddy Zig Zag who is also an incredibly cool guy that did keys in GNR…..and also happened to be in Jesse and the Rippers on Full house! haha. We worked with this really mean producer who was also wrapped up in that whole Guns and Roses circus back during the Appetite for Destruction days and he had a studio in Burbank, CA where we worked on some stuff. The producer was so fried out of his brain from all those years of partying that I rarely had any idea of what he was even talking about. More tour stories than I can even remember, and most of them were the same story over and over haha. I did enjoy Teddy though, super cool dude.

Enoch Magazine : You are just 2 guys? Guitar and Drums. I know that the 2-person band is becoming more popular. How is it easier and how is it more difficult?

The Suicide Denial – Chad Gerber : It’s horrible. We’re hoping to beef the band up to a nice 8 member band in the next few years with some trumpets and 3 bass players for that extra…….beef. No it’s cool. Mostly because both our names are Chad, and everyone knows that people of the same name get along THE BEST! I think the duo thing is just less drama cause there’s less personalities to deal with…. not that we don’t have those problems haha, but they’re pretty small. I can be a pain, but at least I’m only driving 1 person nuts for the most part. It also enables us to tour a little leaner, and make albums faster while maintaining a very specific sound. The longer you make records the more everyone gets restless and wants to “do more” despite originally being happy with exploring in their realm of bass or triangle or whatever. By the end the merch girl feels she’s entitled to a track cause she’s been around long enough haha. I’m totally joking, this duo works for us because it just does. I think it depends 100% on the group dynamics and all that. I respect the amount of work 2012 puts into his craft, and I hope he feels the same way haha. I honestly don’t really know a down side.. agreeing on places to eat?

Enoch Magazine : Your songs sound great for only 2 guys. What are we listening to in terms of the final product. Are you playing bass? What are the brands of instruments you enjoy playing and are on the album?

The Suicide Denial – Chad Gerber : Ah thanks! When we have those 8 members the songs will sound epic haha. The band is broken down into Guitars, Vocals, Percussion, Synth/Synth bass. I love bass guitar, but after being in so many bands with bass guitar I wanted to see what we could do with synth bass, so everything you hear is synth bass. My primary instrument has always been guitar since I was a little kid, but synthesizers are a close 2nd, and 2012’s is percussion, any and all forms. We can do the instrument swapping thing, but for this band there’s a huge importance placed on pushing our skills on instruments we’re passionate about, and dedicated too. Just like in sports ya know? If a pitcher maxes out his skills, he shouldn’t go play 2nd, he needs to push through and……unmax. Yep.. pretty sure I just invented a new terrible word haha.

Enoch Magazine : When your management approached us, the boasted you were the “Smallest Band” on Warped Tour. Is that a play on words cause there’s just 2 of you? He also mentioned you got dropped or kicked off the tour??

The Suicide Denial – Chad Gerber : haha, awesome… thanks management. Man, Warped Tour was a trip. A complicated, emotional roller coaster of a trip. It was our first one so we were pretty stoked and stressed about details and all that. We were performing our full synth rock set in the Kia Soul Lounge when one of the head Vans Warped Tour people walked up to the Kia rep and was like “this is their last set”. Sadly, this was our 2nd show and we had just driven from Los Angeles to the east coast for this whole thing. That was probably the hardest set we’ve ever played… not like “rocking out”, but trying to just finish it. So many emotions going on at once. We talked with Kia and long story short there were some politics, mixed communication, and probably people just having a bad day, and we were done. Totally booted and stranded in Connecticut. Worst part is we didn’t even do anything! Nobody even talked to us. Just sucks being in a situation so out of control. I mean… we didn’t even break anything! I’m sure this is where the “smallest band on tour” comes into play haha. This kind of stuff just doesn’t happen to the big guys. We had a couple long days stranded in a hotel somewhere when we decided we were going to show up at the next show in New Jersey, find Kevin Lyman (the owner of Warped), and see if he could help us. He did. We found him by his bus, he listened to our whole story, talked with the different people involved right there with us in person, and just like that we were allowed to finish our dates. I don’t know if I’ve ever gained so much respect for someone in such a short amount of time, but that guy is mad cool. Not just cause he fixed the situation, but the one dude who could have treated us like the smallest band, treated us like the biggest. It was surreal.

The Suicide Denial – Chad Gerber : I have heard all the usual from people, churches, pastors, street crazies, and the majority seem to tout off select info on Jesus that paints him in a bit of a different light than what I’ve read. The stuff that we all hear constantly is “he loves everyone, he’s not violent, he’s my boyfriend, he always forgives you, he’s going to kill people we don’t like, he just fixed my lawnmower”, it all seems to have turned Jesus into a celebrity, or a squishy Santa who gives wishes. I’m one of those people that has to know something from the source, so early on I read into it and formed my view of Jesus from what the Bible actually says. I figured if his teachings have stood on their own for thousands of years without helpful interpretation by 3rd parties, why can’t people still just read from the source? From what I have read he was tough, extremely smart, on a mission, fearless, bluntly avoided drama, called idiots out, incredibly kind, stayed away from churchy people, respected by everyone BUT churchy people, didn’t confuse people with churchy lingo haha, and was strong enough to forgive people for all the horrific problems they took off themselves and dumped on him via physical torture. No race, culture, or belief system really have grounds to hate him, but maybe grounds to hate the way countless of people have portrayed him.