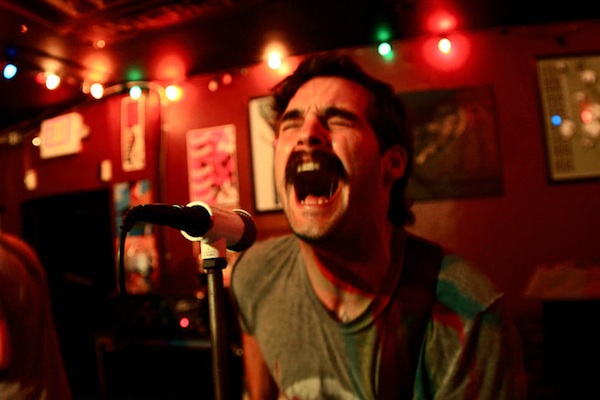 Brandon Ryan interviews Dan Smith from Listener
I recently got to have a conversation with Dan Smith. Who is the founder of a music project entitled ‘listener’ which is currently based out Atlanta GA. At first listen the style of ‘listener’ is unlike anything we would hear being spun on radio airwaves at present time. It is in fact different, because it is what Dan calls: “Talk music”.

Also, you could call it even ‘spoken word’ if you wish. The difference between listener and a lot of other bands in the current mainstream is the shere honesty that comes out of Dan Smith himself. Who chooses to write his words in poems. Having got started playing house shows, Dan went through a handful of members to get to where he is at now with his right hand man, Christin Nelson. Dan and Christin are currently on tour and just finished playing some dates at CornerStone music festival.

My intention with this interview is to help people become aware of something that more and more people should know about, this due that makes up what is, listener. Is self made, they record and produce all their own stuff. Dan and I sat down to talk about his previous album: Return to StruggleVille and the brand new album Wooden Hearts. Which I hope to review very soon, we also talked about faith and life. I hope this inspires you in some way or another, do yourself a favor, and pick up both albums on Itunes or at their website: Iamlistener.com

Hope this finds you well, enjoy:

Enoch Magazine ) Can you please give us a brief background of your life and how you came to love music?

Dan ) I started making music in grade 5 in school band. I played the cornet. I don’t know if I loved it. I started listening to rap music when I was 11 years old. I loved that for sure, and made a ton of it growing up. I was really in to it in high school and stuff. I grew up in southern Missouri, and so it was more of a curiosity to me than something I really knew too much about. You only know what you’re told or the little you get to learn about, so I had a pretty small vision of what the world and that music was about. It was until probably later in high school and in to college that I started to see other genres of music and explore those and like them more.

Enoch Magazine ) For those that don’t know, Listener is a two person band. How did you guys meet?

Dan ) Chris and I met in Nevada about 5 years ago at a house show he threw. “Listener” has always been the name I’ve given my/our project. It’s had different members over the years, but Chris and I have made the last 2 records together and they are the best by far. We met at that show, and then a couple years later I needed a drummer and I overheard him talking about giving drumming lessons and asked him if he wanted to tour and then we started touring a making music together. I used to make hiphop music and I also called what I did Listener too, and some people get confused about that….so I explain it as Listener is the name that I use for the projects I put out.

Enoch Magazine ) On your album Return to Struggleville, there tends to be a lot of pain on that record. What songs best desribe you as a person?

Dan ) Well, none of them really. It’s mostly a social commentary and a concept record. I saw a lot of my friends and peers and country undergoing this sort of drain with buying and selling things and climbing ladders and chasing possessions and not putting worth in people and wanted to write about that. I don’t know if any of those songs describe me as a person really. Sometimes I feel like we’re out here on the road like traveling salesmen selling stuff, but it’s more than that.

Enoch Magazine ) In my understanding life is very hard for most of us, what helps you keep doing what your doing everyday?

Dan ) Yeah, life can be hard, but it’s only as hard as you make it I think. Chris has a song called the truth about tragedy, and basically it’s about the fact that we need tragedy in our lives to help us round ourselves out as people and learn the things we need to learn in life. I’m not a fan of tragedy, but it happens and those are the things that make life. You can’t always have it easy, because you will never learn the truths you need to learn to survive. I like to tour and make music and play shows, and we get to. Life isn’t necessarily hard. I put tight restrictions on myself and set goals and work hard to accomplish them

Enoch Magazine ) When I think of “Talk Music” for some reason the band Mewithoutyou, with all the different genres of music out there. Why does spoken word/talk muic suit you the best

Dan ) Poems are how I have always written the words that I’ve written….and so that’s just how I know how to write a song. I like the band mewithoutyou. I think they make very open honest music and their words are great too. I started doing house shows about 5 years ago and I wanted to play for everyone and not just hiphop fans…..because at the time that’s all we played for, and so we wanted to do something different and have our promoters put something different on the flier….so we called it talk music.

Enoch Magazine ) What inspires your poems?

Dan ) Boringly enough, just life….quotes and thoughts and daydreams and visions. I try and log it all down on my phone or papers or my computer or wherever and when I get some quiet time to sit and think about my thoughts I pull out other words and make a poem about it all.

Enoch Magazine ) How did you come to faith in God, and how do you “keep the faith” on the road?

Dan ) I was raised in a Christian church by my mom. she’s a great lady. I believed most of what I was taught and didn’t have a problem with it….and it was until maybe later in high school and college that I started to believe the things I do about faith and community and God the creator and made that a personal thing….and something I believe in. Keeping faith isn’t hard on the road….it’s just as hard as doing that when you’re working a dead end job or are happy with life…..there are good times and bad times, but I know that faith is about decisions and making them….so it’s a daily thing and a want to renew my mind and body and do the things I’m passionate about and have a vision for.

Enoch Magazine ) Do you guys record all your music by yourselves? And do you like doing things yourselves, rather than searching out a record deal?

Dan ) Yeah, we record everything we do ourselves. I’ve put out projects on record labels before and that’s been great and so is doing it ourselves…..I’ve actually always recorded songs and albums myself anyways, and just handed the finished product in to be distributed…..we may work with a record label in the future….we’d be just fine with that actually….but none of them have come calling and the packages we’ve sent out so far have fallen on deaf ears I imagine….so we’ll just keep making music that is from us and our hearts and keep touring and do what we love to do. I’m not in the business of waiting around for someone or some company to “validate” me or us as a band. This is something we do already whether or not a record label wants to be a part of that or not.

Enoch Magazine ) You have a new album coming out called “wooden hearts” why did you choose that name?

Dan ) It’s pretty much off of the song wooden heart…that’s about it. The song is about a realization that I had about how we’re all a big and small family and community pieced together of shipwrecked parts and bits….all of us on our own voyages and wrecked in one way or another in different cities and places in life, and we come together all just pieces to form a whole….and the album is pretty much about that too, so I called it that.

Enoch Magazine ) Did you feel in pressure writing the new album? What do you hope to get across through it?

Dan ) No pressure at all…..perhaps personal pressure to put out a new record and time-lines of getting things done and right….but no pressure in saying things. We made the music and words that we wanted to make from our lives.

Enoch Magazine ) Do you have inspiring words of wisdom for our readers?

Dan ) I don’t know. there’s a lot of inspiring words out there…..my favorite is “chop your own wood and it will warm you twice”.

to “Listener Interview with Dan Smith”