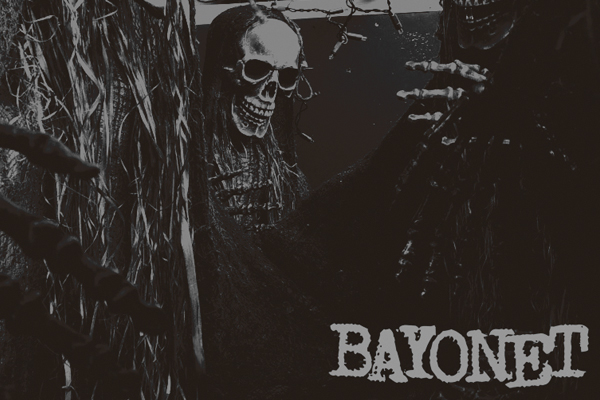 I’ve always been a big Senses Fail fan and I love their raw power and emotion. When I heard their singer Buddy Nielsen started a new side project, Bayonet (Mightier Than Sword Records), that was hardcore punk I jumped at the opportunity to interview him. Their lyrics are so full of emotion and intensity and I really wanted to hear what Buddy Nielsen had to say about it.

Enoch Magazine : Bayonet (Mightier Than Sword Records) is quite the change from Senses Fail. It’s darker, heavier and takes us back to the hardcore sound that it seems so many bands have gotten away from. How did this project come about and what are your goals as a band?

Buddy Nielsen (Bayonet) : I just love that style of music and always wanted to do something heavier than Senses Fail. Ben who used to be in Armor For Sleep put me in touch with Jeremy and we got together and just started working on songs. I knew him from other local bands he had been in years ago but we hadn’t crossed paths in awhile.

Enoch Magazine : The more I listen to this record the more I love this record. Its raw, wears me out with a listen, and gives me an overall sense of stress relief when I listen to it. Can you tell me about the recording process and did you do anything different to write the lyrics and bring about so much emotion.

Buddy Nielsen (Bayonet) : I spent a lot less time with the lyrics for this stuff than I do for Senses Fail which is kind of refreshing. I like that I can just spit something out and not be to critical of it. We want the recording to sound raw and jagged so we put our focus more on the performances than we did on making sure everything sounded perfect. We didn’t want it to sound pretty, we wanted a sort of blown out sound.

Enoch Magazine : I am intrigued by the lyrics in Nightmare.

“ I live my life like I’m going to hell
So when I get there I won’t fell like I failed
From the highs, through the lies
At least I know what you’re doing
A simple point, a simple fate
But I can’t keep my hopes with me”

Buddy Nielsen (Bayonet) : I believe that people can experience hell on earth and as a state of mind not in hell as an place. The same goes for heaven.

Enoch Magazine : “The lyrics in “Who’s Gonna want me Now” say “What did Jesus Christ know about Redemption?” Christianity bases many of its beliefs that Jesus Christ was redemption by dying on a cross for our sins and its something that’s been argued and debated for hundreds of years. What is your perception of Jesus Christ and do you think he actually existed?

Buddy Nielsen (Bayonet) : Not to take away from anyone’s beliefs but I don’t personally believe that Jesus Christ is the son of God. I do believe he lived and help guide a movement but I don’t believe he was anything more than a human just liked everyone else.

Enoch Magazine : When you’re a band, your income depends on constantly touring. How do you handle life away from family and friends and is it hard to get into a regular schedule when you’re not on tour?

Buddy Nielsen (Bayonet) : I actually haven’t been touring as much as I have. I am co-owner of a record label called Mightier Than Sword and started managing a couple bands, Hostage Calm and I Call Fives. I like touring and it is something I am always going to do but it won’t be as frequently as it used to be. We have pretty much gone non stop for 10 years and a little break is welcomed.

Enoch Magazine : Our magazine has spent a lot of time with the homeless on Skid Row In Los Angeles. My wife and I actually lived in a mission on skid row and spent a year of our lives working with the homeless. In our work there we found so many of the homeless struggle with mental illness and depression. I read in quite a few interviews that you previously struggled with depression and anxiety. What advice do you have for people who struggle with us and what helped you to overcome it? (If you’re not familiar with Skid Row, it’s a 9 by 9 block radius where they estimate over 10,000 people live in downtown Los Angeles.)

Buddy Nielsen (Bayonet) : That is very awesome that you guys lend your time to a helping others. Skid Row is a rough place, I have been to the area before. The advice I give to people about anxiety is that, it will end, it will not always be like this. When you start to suffer from anxiety attacked it feels like you are stuck in the cycle with no way out and you end up causing your own attacks. The best thing I can tell people to help break the cycle is to exercise everyday. I started doing brazilian jiujitsu 4 years ago and it has helped me to pretty much get rid of my anxiety issue, it not only helped me deal with the actually attacks but has made me more confident over all. I highly recommend making exercise and physical activity to anyone that suffers form anxiety.

Enoch Magazine : It seems every kid plays in a band these days. What advice do you have for a kids that want to make a career out of music?

Buddy Nielsen (Bayonet) : Make sure you are in it for the right reasons or it won’t last long. It is a lot easier to be in a band now a days which means there are people that are fairweather about it, people that do it as a hobby and not as a passion.

Enoch Magazine : The idea of the supergroup has been in existence forever. My Supergroup is Axl Rose, Les Claypool, Greg Hetson and Neil Peart. If you could put together a 4 person Supergroup who would you have in the band?

to “Bayonet Interview with Buddy Nielsen”