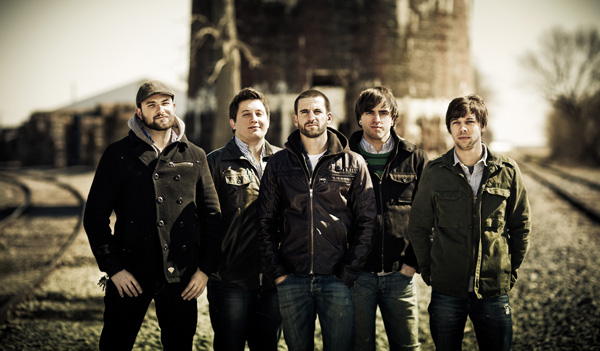 August Burns Red (Solid State Records) has been tearing up the metal scene for the last 8 years. They tour relentlessly, love to interact with their fans and just released their new album Leveler on Solid State Records. When i had the chance to interview their drummer, Matt Greiner I was excited to hear what he had to say.

Enoch Magazine : With the release of LEVELER, where there any specific events that really shaped the making of the album? (If so please explain)

Matt Greiner (August Burns Red) : Leveler is August Burns Red’s (Solid State Records) fourth full-length CD. I don’t think anyone in the band is very sure of how the songs are going to turn out when it comes time to piece together a new record. Touring as much as we do doesn’t allow us an extensive amount of time in our practice space at home to write new material. It does, however, give us experience being world travelers, nomadic PA boys living the dream. ‘Pangaea’ is a song about being away from home and not having the luxury to drive home from ‘a day at the office’ and sleep in your own bed. ‘Boys Of Fall’ is a song about four teenage football players from our hometown who died in a tragic accident. ‘Empire’ is about human ingenuity. Leveler was inspired by our own personal experiences. We wrote from our hearts and weren’t afraid to say what it is we’ve experienced and what it’s made us believe.

Enoch Magazine : August Burns Red (Solid State Records) seems to be very personable with their fans, more so than most bands I’ve seen, Does this come naturally for you guys?

Matt Greiner (August Burns Red) : I think it’s really important to connect with fans and let them know you appreciate their support. We all know that we wouldn’t be here riding in a bus, playing main stage on the Vans Warped Tour, and recently releasing Leveler if it weren’t for a massive amount of people believing in what we are doing and showing up to our concerts. I wasn’t always as outgoing with fans, but over the past two years I’ve really enjoyed getting to know who our fans are. My faith in Jesus Christ is very important to me and I’m driven to talk about it with
our fans.

Enoch Magazine : From what I’ve seen of the band, you all seem to have so much joy and happiness on your faces. What is the main cause of this? And what can you tell people who crave the same joy you guys have?

Matt Greiner (August Burns Red) : Honestly I think a lot of it has to do with our friendship with each other. We are all close to one another as well as our crew and it makes for a fun and lively environment when on tour together. We love playing music and enjoy traveling… what’s not to be happy about?

Enoch Magazine : On the other side of the coin, how often do you guys get annoyed or find yourself in conflict with one another, and how do you resolve that?

Matt Greiner (August Burns Red) : We’ve been a touring band for 5 years and have gotten familiar with what annoys someone. It’s just about knowing what buttons not to push and staying out of each other’s ways sometimes. We have grown up a lot in this band and our relationships are solid with one another in spite of our differences.

Enoch Magazine : There has been some mixed feelings towards LEVELER, either people love it or hate it. I really enjoyed it. How do you deal with the criticism?

Matt Greiner (August Burns Red) : I don’t mind criticism as long as it’s well written and spelled out. I get really annoyed at critics who write about something they hate about August Burns Red (Solid State Records) but deny us their opinion on what can be done about the matter. I’m OK with you not enjoying the music we create or not supporting what we stand for, but I think it’s bogus to shoot arrows at us and not offer any sense of resolution on the matter.

Enoch Magazine : You guys seem to be increasing your message of faith and hope in Jesus Christ more and more with each record. Has that simply come with a sense of urgency to communicate that message and how do you deal with people who are “turned off” by it?

Matt Greiner (August Burns Red) : Our message is relevant, our faith is important to us, our hope is in Jesus Christ. I think it’s impossible to write genuine lyrics that actually mean something if they don’t mean a thing to the author. We write about what we believe in, experiences we’ve had that we’ve learned from; if nothing else our goal is that our words are honest and true. It’s hard to negate someone’s personal testimony. No one can refute something that you’ve lived to tell of. We write songs about a God that does love us and gives His love for us to give away. There are people who are turned off by that message and we certainly don’t want to push them away. On the contrary, I’d like to talk to those people about what it is they believe in. We encourage people to share their opinions. We all can learn from each other!

Enoch Magazine : In the song Salt and Light, Jake seems to break out in a sort of spoken word format, talking in terms of being killed for the sake of Christ. Was there an event or book that spurred those lyrics on?

Matt Greiner (August Burns Red) : No, Jake just wanted to write about the idea of Christ’s legacy living on for thousands of years after His live on earth. He talks about being a harbinger, not an author of timeless words and prays that his words would live on even if his were cut short and his life was ended.

Enoch Magazine : There is a song on the record where Jake talks about “truly forgiving” someone. (I forgot which one) I was wondering if any details could be shed on what happened in that relationship?

Matt Greiner (August Burns Red) : In the title track, ‘Leveler,’ Jake talks about what it is to forgive someone. He wanted to convey the message that you don’t have to condone someone’s behavior in order to forgive them but rather judgement must be made about how you were wronged and forgiveness given in exchange.

Enoch Magazine : If someone is interested in your music, what would you tell them to expect from your music?

Enoch Magazine : I see that Jake, is involved with yourlifeministires.com. Can you tell our readers more about what this is and why you are involved with it?

Matt Greiner (August Burns Red) : Jake started Your Life Ministries two years ago and asked me to be a part of the ministry. Jake signs autographs and talks to fans after our shows at the merch table and had an idea to launch a website where he could refer fans to and keep in touch with them. I really enjoy being a part of Jake’s ministry and responding to our fans’ requests for fellowship and discipleship!